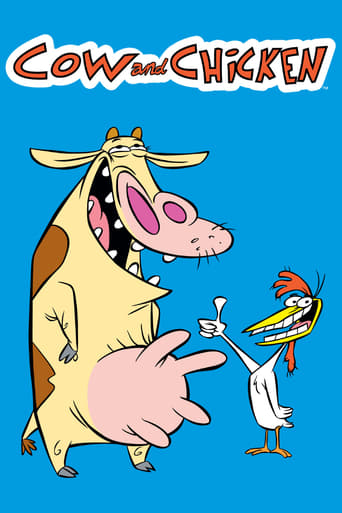 Cow and Chicken is an American animated comedy television series created by David Feiss for Cartoon Network. The series follows the surreal adventures of a cow, named Cow, and her chicken brother, named Chicken. They are often antagonized by "The Red Guy", who poses as various characters to scam them. Late into the series run, the characters I.M. Weasel and I.R. Baboon, who were part of the series' recurring segment, I Am Weasel, were given their own half-hour series of the same name. Like Dexter's Laboratory and some other Cartoon Network series from the 1990s, the original pilot appeared as an episode of the animated shorts showcase project What a Cartoon!, the brainchild of Fred Seibert, then-president of Hanna-Barbera. The Cow and Chicken series first broadcast on Cartoon Network from July 15, 1997, to July 24, 1999, with reruns airing prominently on the network until April 2006. Reruns are played on Boomerang, which are rated TV-Y7. The series was nominated for an Emmy Award in 1996 and 1998.